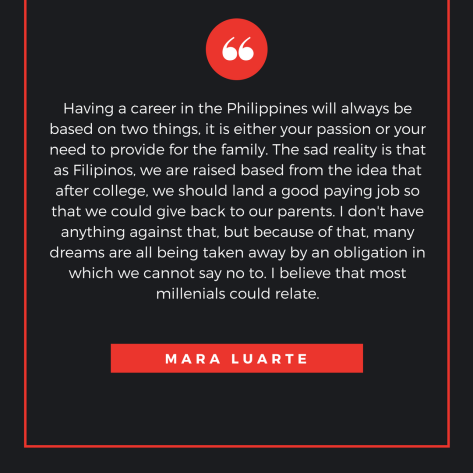 As it appears, it gathered lots of engagements, which isn’t really surprising considering the huge number of Filipinos who are on Facebook. But other than that, I also think many Filipinos could relate. I’m not saying that this is true for everyone for I’ve known a few who are pursuing their passion without being ‘tied up’ to this so-called cultural obligation.

Having close family ties is one of the distinct characteristics a typical Filipino family has. Whereas other cultures celebrate the coming of age as a milestone in life where children can move out of the house and live independently, a lot of Filipinos don’t see it this way.

Extended families living under one roof is not surprising. Children are not encouraged to move out unless it’s highly necessary – like a job relocation, perhaps.

But while this culture has fostered closer family relationships, it also gave birth to the thinking that you’ll need to provide for the family, because after all, you are living with them. The premise that you need to pay back the people who sent you to school is common.

Just like Mara, I also don’t see anything wrong with this. But it’s a whole new different story when you’re already giving up what matters most to you – your dreams maybe – just to keep on supporting your family. You can provide, but this need not be a reason for you to be deprived of doing what you love best – what you’re good at and what you’re called to do – even if it doesn’t pay that well.

Yet the sad opposite is happening.

And a lot may feel like this is beyond their control because typical jobs in the Philippines don’t necessarily pay enough to support your family – much more the family you want to build yourself.

It’s just so sad to think how that one thing you sacrificed might have contributed more if given the chance to prosper.

But you can never judge.

Besides, there are also those who consider supporting their family as their calling. It’s just not for everyone.

I grew up in the same culture. I’m also providing for my family. And yes, I’ve sacrificed things. Things that I regretted. But it was my decision. And I’m not giving up on my dream.

The Introvert Me at Play